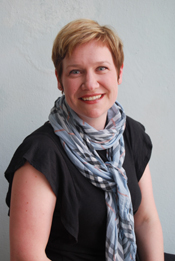 by Sally Hess
As I watched the priests dust flour on the ground in outlines of symbolic shapes, I reflected on how utterly foreign the Cagli celebration of Corpus Christi is for me. I grew up in a secular university town of 100,000 people that swelled by thousands when the students returned each fall. Our streets were wide and usually freshly-paved, not the narrow cobblestone roads that the Cagliese have walked on for over a thousand years. The Cagli roads are narrow and are lined not with sidewalks but with stone entryways and twelve-foot high ancient wooden doors. Often the doorways are intimately close to each other as apartments lead straight back through the buildings. Most buildings have three or four or five floors, each with windows looking out to the street.

As the Corpus Christi merriment got underway, neighbors on the upper floors watched family members and friends down on the street, calling out greetings to each other. I was reminded of the balcony scene in Romeo and Juliet when she calls from her balcony. I imagined the times when wooden balconies protruded from the windows of the buildings, allowing people to walk from one apartment to another without going down to the dirty street level. In 2015, there is no remnant of the medieval balconies, but there is a persistent level of interaction between the street and the homes. It is a millennia old expectation that the community will come together for the ritual. On the west coast of the United States, we don’t have any cultural ties that bind communities in this way. We lack the heritage and traditions that are the birthright of Italians. By taking part in the decorating of their community, small-town Italians affirm their place in the community, an investment in their future place in the community, and the permanence of the ritual as a part of their cultural identity.
Posted by giovanni at 6/13/2015 08:46:00 PM