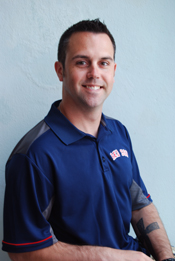 by Joseph Shepard
(This is an excerpt from Joe's complete blog entry-- to read the whole thing, click 'read more' at the end of the post.)

So, where were we?

Urbino is very westernized, and if you change the language from Italian to English, it could easily pass as just another nice college town in the United States. Young college students were everywhere you turned, and for good reason. Urbino has a small handful of universities within its city limits: Accademia Di Belle Arti and Universita Collegio Raffaello are just two that come to mind. Even though we were Americans studying abroad, it didn’t really seem like we stood out in Urbino the same way we stand out in Cagli. We blended right in. Well, at least until people realized our grip on the Italian language needed work. At one point, a group of us walked by (well, they walked, I was still hobbling with an umbrella as a cane) a small store, and in the window was a statue of David with a Barbie doll sitting on top of his shoulders. It was an interesting way for two cultures to intersect, and I didn’t ever consider those two iconic symbols together in that way. I just didn’t see it coming. A few minutes later, the group walked into a small café for a drink and a snack, and the radio was playing “Thriller” by Michael Jackson. Rather than playing a hot local Italian musician, they chose the most iconic pop artist in modern history to put over the airwaves. The students in the city were decked out in shirts with many American symbols and companies on them, from Monster to Metallica (man, they must really love that band here).

I might have been more observant today if my immune system wasn’t fighting an all-out war against an invading coalition of bacteria, viruses, and other microscopic demon-spawn hell bent on turning my vital organs into goo. Walking up all the long, steep hills wasn’t helping my cause either.

Day 7
We started the day with another photography class. It wasn’t all that serious or formal. Instead, Dave put together a slide show of some of our work. After going through everything we shot (and there must have been hundreds of photos to sort out), he picked out the best four or five that everyone took so we could all review them. We were all nervous that we’d get ripped for all the ones that made it on the cutting room floor. Instead, it was the exact opposite. It was, “you all captured some great images, and here they are.” There were two I captured that turned out especially well. One was awkward lunch Saturday morning with the big communication breakdown. It was a shot of a couple classmates, Shea’lyn and Allison, sitting at the outside table with a couple of wine glasses in front of them, plus the bottle of vino in between. Seems simple enough, but the angle of the sunlight is what really made the photo stand out. Another one was captured the day before (I think) of a tight street somewhere in Cagli. What made that one work was, just like the previous one, the lighting. It really hit that fine line between “too much” and “not enough.” If there was just a flood of sunlight, it would have made it seem artificial. But, if there wasn’t enough, the photo would have been too dark and nobody would have been able to see anything. Finding the happy middle is easier said than done, plus having to capture the architecture of the city up close on top of that is a pretty good challenge. Somehow, I was able to pull it off. Just have to wait for the appropriate timing.
After class, a few of us were chatting about photojournalism and of photography in general. We were all pretty anxious about the assignment, even though we all got them in on time. Then, the conversation morphed into “how many do you have to take to get the right one?” That’s when we realized how much extra pressure we’d put on ourselves when we didn’t really have to. Maybe it was the rush of having multiple assignments all at once? Let’s say, for example, you’re covering a pro basketball game. Only one or two shots will make it into the next day’s paper, and maybe a few more on the website. Will you still only take a small amount of shots? Of course not! You’ll keep snapping away until you really capture the best one. The rest? Well, don’t worry about the rest.
Let’s move on.
This is where I’ll include my short reflections piece I wrote, mostly to collaborate everything into one spot. Plus, hopefully somebody reading this will like it. So, without waiting another moment, here it is.

It is a sleepy town in a sleepy corner in eastern Italy, yet when the evening rolls around, Cagli comes alive. To be sure, it is very alive in the early morning, just as it is now. But in between? That is when le pausa makes its arrival. “The Pause” is an extended afternoon break for the Cagliese. Why is le pausa done, needed, or necessary when the working citizens are hungry for a good lunch, or have a thirst for a cold drink? That is a simple question, and requires a simple answer. All Cagliese enjoy their mid-afternoon breaks, just like everyone else. As a result, this village shuts down temporarily, every day. But, only for a pause.
June should be a month of constant sunshine, but today, the evening is overcast. Nobody seems to notice. Seems like it is business as usual. Jake, the boss of Café D’Italia, serves his customers inside and outside his establishment. Name the product, odds are, he’ll serve it himself. From hot coffee, cold beer, or champagne on ice, all it takes is a simple question and a smile. Clouds in the sky don’t stop the steady demand for his famous gelato, a treat that can only be tasted to be believed.
The main square in Cagli where Café D’Italia is located, il piazza, is the stage for the majority of Cagli’s essence. It is the place where City Hall is found, along with tobacco shops, pizzerias, cafes, restaurantes, and a traffic square that occasionally resembles a race track. FIATs, Vespas, BMWs, apes, Mercedes Benzes, and Volkswagens all zip through the square around the water fountain that, for some reason, isn’t working. An occasional Jeep Liberty or Renegade can be found, but nothing bigger than that. All this happens only a few feet away from Café D’Italia, or any of the other shops in il piazza. The Cagliese may notice a bit, but they keep on with their day. The organized chaos doesn’t bother them much. And forget about the senior citizens enjoying another evening on the stoop at City Hall, they are so far entrenched in conversation they don’t notice the pseudo races going on right in front of them anymore. The worst that may happen?The sound of tires screeching. The Cagliese will look up, see nothing is astray, and pick up right where they left off.
Who is creating the sound of the screeching tires? Perhaps it is a driver quickly stopping simply to say “salve!” or “ciao!”to their friends, and then moving on. That happens quite often. Everyone knows everyone here. Is it a young driver? Perhaps it is. Youth is not wasted on the young in Cagli. Look no further than the young couple walking arm-in-arm into il piazza unable to keep from gazing in each other’s eyes, or the other young couple at Café D’Italia enjoying a coffee together. Don’t let the skull and cross bones on the young lady’s shirt cause a distraction; politeness is a universal language. So is a smile. And so is a young mother’s love for her newborn, on display to all in il piazza following le pausa.
Cagli. It comes alive.
I changed around the format to Times New Roman, since that’s the format required for the vast majority of the assignments I’ve had in the COML program. Sure, there were times when I tried to use a loophole to vaguely put myself in the article without using “I,” “me,” or “we,” but Prof. Morehouse caught me. You have to give her credit; you can’t really throw anything by her. She loves writing and editing. Maybe it’s just me, but I might have been the only person in the class that wasn’t sweating the reflection piece, or any of the written assignments we’ve got lined up. I’ve done it professionally in the past, so it is nothing new to me. Plus, I love writing in general. Take this journal, for example. I’m only at Day 7, and according to the bottom of the screen, I’m at 16 pages and 9,300 words. My mind and my fingers work well together once they get going.
Let’s hope the good adventures keep coming tomorrow.