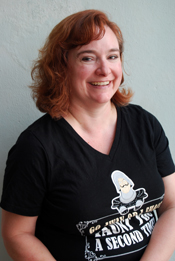 by Angie Sillonis
The Cagli program is in the home stretch – only two full days remain, and I’m torn between the deep desire to nap, and the desire to get out and see everything I’ve missed thus far. The bulk of my school work is complete, and I sit at the apartment table, working on loading photos to Facebook for my friends and family to see, plus uploading some to a thumb drive for our class slide show. Everyone deserves to see photos of themselves playing bocce projected onto a wall! I learned a few things about my classmates from playing bocce with them. The ones you knew were athletic were quite good at the game, but a couple others were equally good, and very competitive! Kate appears to be such a kind and timid soul, but don’t threaten her supremacy at bocce, or you may get injured! It was so much fun, and we all appreciated the chefs, particularly Patrick, who spent much of the evening outside barbecuing sausages for the group. The people here are so nice, and we don’t even have to open our mouths for them to know we’re the Americanos. I went to the bar at the bocce facility to get a beer for a classmate, and the bartender handed me two bottles of wine which were intended for our group. I nearly couldn’t convince him that I also wanted a beer! We followed up the barbecue and bocce with a very short bar crawl to celebrate Corey and LeAna’s birthday. Short, because there are exactly two bars in the piazza. We had so much fun singing and dancing to the music at Café d’Italia, the bartender started letting us chose the songs. Dr. C likes to say, “we work hard, and we play hard.” We’ll long be proud of the work we’ve done here, but the memories we’re making will last a lifetime. 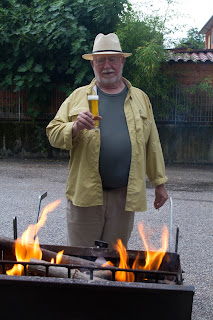 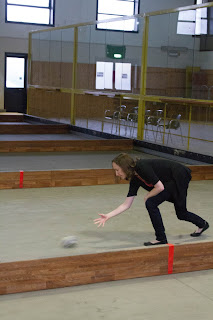