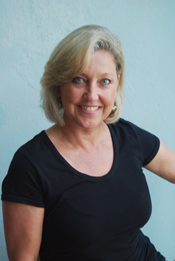 by Leona George-Davidson
During my time here in Cagli I have not been able to deal with taking out the trash. This has happened to me at home as well. It occurs when I am emotionally, spiritually and physically overwhelmed. In this case I have the added components of intellectual and cultural overwhelm as well.

I am fortunate that my apartment mate has the brain capacity to sort and take out the trash, otherwise we would be swimming in bags of garbage all over the place.

On the flip side, I have had the capacity to keep our electronic gear organized, turn out the lights every time we leave a room, and to maintain the opening and closing of the windows and shutters during the days and nights for airflow and temperature management.

It fascinates me that both my apartment mate and I are experiencing overwhelm, but that it manifests in different areas. There is a lot going on at once: learning a new language and new customs, getting to know the people and layout of Cagli, getting to know our school mates, managing the school work and schedule, and trying to keep the basics of staying well fed, clean, and rested.

With all of this simultaneous input (immersion will do that to you), it is no wonder that I just can’t deal with figuring out how the trash is sorted and disposed of in this community. It is also no wonder that my apartment mate doesn’t want to deal with figuring out how to operate the shutters. Sometimes you just have to let some things go. Thankfully we have each other’s backs – this is a great relief – we have easily fallen into a great level of care for one another.

So, when our trash piled up in the kitchen and bathroom my apartment mate would patiently sort through it and take it out to the trash station (where she carefully watched the local folk to see how they did it) and I would keep our apartment cool and breezy during the days and warm and breezy at night.

Here is the trash layout:

Up the street from our apartment, and lined neatly against the stone wall, there stands a station of nine trash and recycling bins. There are many of these “trash” stations around town, and this particular set is shared between the neighbors on our small city block of Via Lapis in Cagli. To a newcomer or someone who is not well versed in the Italian trash system (or to someone like me who is overwhelmed) it might be daunting to figure out what goes where.

It goes like this: Metallics (metal, aluminum, etc.) go in the one white can; glass goes in either of the two blue cans; and organic refuse (food scraps, etc.) goes the two brown bins. The three dumpster type receptacles are for other items: the yellow dumpster is for plastic; the red dumpster is for paper; and the gray dumpster is for anything that doesn’t “belong” in the other bins. Each of these three large dumpsters has a foot operated pedal to make it easier to open the bin when hands are full of bags, bottles, and other trash. There is one additional bin that is used to dispose of cooking oil. It has a small round opening on the top that opens by rotating it clockwise to expose the hole to toss the oil in. However, don’t just pour the oil directly in the hole – instead, put the oil into a metal or glass container with a lid on it, then put that into the bin.

This is a very similar system to ours at home, but with everything else that is new in this immersion experience, it seems so foreign. Can you see how this could make a person’s brain shut down?! Ack! I’ll just let the trash pile up!

There are two things that strike me about Cagli’s system: Unlike the USA where most everyone has their own trash receptacles at their homes, Cagliese share their trash bins out on the street (perhaps this would be like duplex or apartment living in the USA). Additionally, my town, Novato, California, uses what is called “single stream recycling.” Single stream recycling means that everything can be thrown into one bin, which is to be sorted out later at the recycling plant for recycling, repurposing, and disposal. Therefore, at home, I am accustomed to throwing all my recyclables into one bin without the effort of sorting it ahead of time.

I am not exactly sure why the shutter system came easy to me. Perhaps it was because I do temperature management at home with doors and windows (at my house, which is a total of 990 square feet, we do not have an air conditioner and our only heat source is a small gas stove in our living room). It also may be that when I was in Saint Jean Pied de Port, France, a few days before Cagli, I noticed that our landlady had opened the shutters and latched them a certain way during the day. Whatever it was, I figured it out and it was easy for my brain to handle amid all the ruckus of cultural absorption.

Here is how to work the windows and shutters:

First of all the windows and shutters work independently of each other. But, they do have the same type of latch, so at least that is consistent.

To open the latch, it is simply lifted up. Once it is lifted up, it gets pulled away from the window in order to engage the vertical rod which then unlatches the small hook at the bottom of the window. Now that it is un-hooked the window can be pulled open (the windows open into the room).

The shutters work the same, but they open out into the street.

If you want the shutters partially closed (still a temperate day, but perhaps when the sun is on that side of the building), you just pull them three quarters closed and latch the metal latch which leaves just enough room for air flow, but blocks the sunlight. You can also do this same thing with the windows as well.

My apartment mate and I like air flow at night, so I would always make sure to get the shutters and windows in the right position before bed. I particularly like them open at night, not only for air flow, but also for the sounds and scents that each evening would bring.

I loved hearing the sounds of families they walked through the street going about their nightly lives (often the sound of glass clinking as they deposited their recyclables into the dumpsters and bins), the fast hum of Vespas wizzing by, and my American school mates as they unlocked our front door to come in after a night of wine and gelato in the Piazza.

My absolute favorite night time open window and shutter moment was in the wee hours of two o’clock one morning. I was in bed in the dark, journaling, thinking, and crying from all the stress, and all of the sudden, in wafted two scents, married to each other on the breeze: fresh baked pastries and tiglio trees.

On the very last day of our time in Cagli, as my apartment mate packed for departure, I set about finishing the clean up of our kitchen. My apartment mate had already sorted, bag, bucketed, and basketed all of our trash and I took the bold move of bringing it all down to the trash station. I made four trips in total and was able to get everything into the right bin.

With everything cleaned up and packed, I was ready to head out. I closed the windows and shutters in the kitchen and bedroom, but left the bathroom window and shutter open for my apartment mate since she was still in process of getting ready for her own departure. I called out to her and asked if she would be able to make sure it was shut and latched before she left. She called out in Italian, “Non c’e problema” – “No problem.”

Wow. We came a long way.

In cultural immersion, seemingly simple tasks can become overwhelming. And when they are tasks of infrastructure that are important to daily living, the frustration can mount. The teamwork and care that my apartment mate and I had for one another was wonderful and that is what got us through it – no trash talk between us, only understanding and love.
Posted by giovanni at 6/27/2015 07:17:00 PM